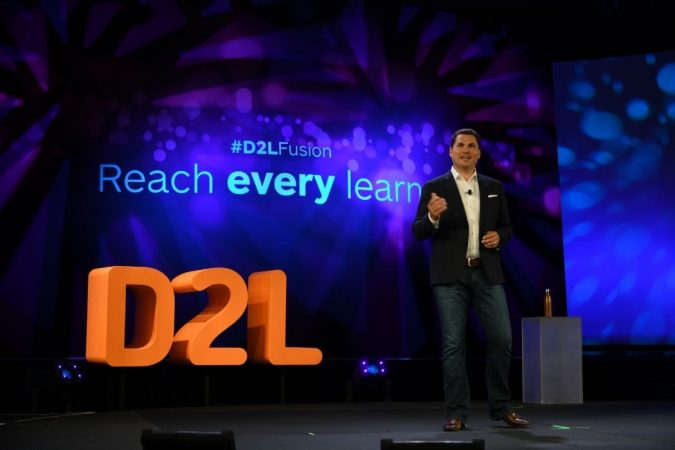 D2L Inc. reported its fiscal 2023 second quarter results for the period ending July 31, showing that while edTech companies are not immune from the economic downturn, they may be slightly better prepared to weather it.

The TSX-listed company managed to rack up increased revenues in its second quarter of 2022 despite what president and CEO John Baker referred to as a “slower” second quarter than expected.

The company announced a 12 percent increase year-over-year in its second quarter revenue to $41.2 million (all figures in USD), up from $36.7 million last year, and posted a gross profit of $26.6 million, an increase of 13 percent over the previous same period last year or a slight increase from $23.5 million.

D2L attributed the latter change to a $15.6 million fair value loss on redeemable convertible preferred shares from the previous period, with no corresponding impact on the current reporting period.

“We continue to see healthy long-term demand across our education and corporate markets as organizations replace legacy technology and experiences with modern platforms built for the future of work and learning,” said Baker.

“However,” Baker added, “the overall pace of new business growth in the second quarter was slower than we expected, mainly reflecting delays in expanding our sales and marketing teams, as well as the impact of changes in foreign exchange rates.”

Nonetheless, it didn’t stop the company from forging ahead in its second quarter. Among the quarter’s achievements, D2L hosted its annual Fusion customer conference in person for the first time in three years. The conference attracted nearly 3,000 registrations, and included 100 speaking sessions.

As well, D2L delivered professional learning to the staff of Boston Public Schools; signed a new customer agreement with the American College of Lifestyle Medicine to help grow their membership, among other things; and brought on board Midwest Communications, a radio and digital media company, to support automation of employee onboarding, training, and development programs.

It’s projection for adjusted EBITDA loss is in the range of $6 million to $8 million rather than the previously forecast $9 million to $11 million.

Explaining the new figures, D2L said while it continues to see robust long-term demand for learning platforms across its education and corporate markets, a number of changes are impacting its forecast.

These include headwinds scaling the company’s sales and marketing teams; as well as the impact of changes in foreign exchange rates, including the strengthening US dollar.

D2L noted that its expected adjusted EBITDA loss in fiscal 2023 is a reflection of what the company called “disciplined cost optimization and measured prioritization of investments, thereby putting the company on an accelerated path to profitability.”

Founded in 1999 by Baker, a then 22-year-old University of Waterloo engineering student, D2L was bootstrapped until 2012, when it secured $80 million in venture financing.

D2L went public in November, 2021, trading under the symbol ‘DTOL,’ and generating $150 million in gross proceeds from its IPO. Ahead of its TSX listing, D2L ended up reducing the size and pricing of its IPO, originally planning to sell about 9.5 million to 10.5 million shares, with each being sold within the $19 to $21 price range, for about $200 million in potential gross proceeds.

Despite slower than expected growth, D2L’s revenue did increase and it may be easy to dismiss its earnings as an anomaly, but EdTech company Think Research also posted increased revenue in its second quarter results announced at the end of August, showing the EdTech sector in general seems to possess some traction.

A second quarter 2022 EdTech market update from investment bank Lincoln International acknowledged that such companies have been affected by the market, but that “digital learning is here to stay and we see that continuing to pervade investment decisions.”

Looking at the bank’s Education Technology & Services Stock Indices Data, that lists 13 EdTech firms including D2L, it shows a year-over-year revenue growth for the companies of 23.9 percent.

That said, D2L’s stock price among its cohort was on the low end at $5.65, and therefore probably contributed to dragging the index down.

Even so, D2L experienced year-over-year growth of 38.3 percent, according to Lincoln International’s index.