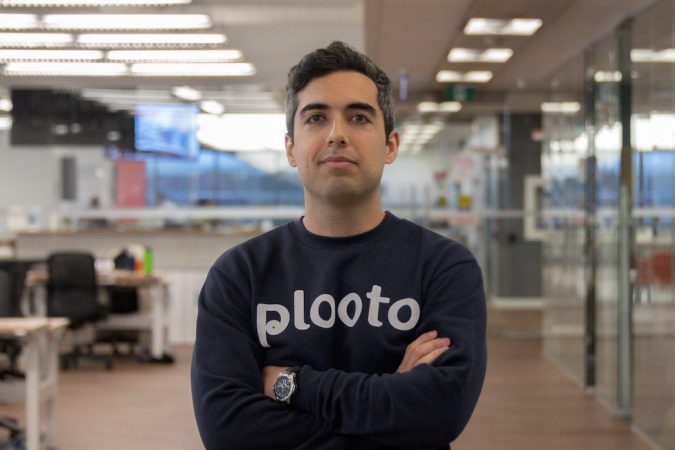 After years of seeing shoeboxes full of receipts land on his desk week after week, Plooto CEO and co-founder Hamed Abbasi finally found a better way to manage business payments.

Fifteen years ago, Abbasi was a financial services manager at the Bank of Montréal (BMO), and noticed a peculiar trend: small to medium-sized businesses (SMBs) would come to the bank with piles of invoices and receipts, all trying to get a better understanding of their expenses and cash flow. Nearly all of the entrepreneurs Abbasi worked with at BMO struggled with the same problem: managing their money.

According to a survey from QuickBooks, more than two-thirds of small business owners say they are kept up at night by cash flow concerns. “​​I really never thought of it as a problem that I could solve,” Abbasi told BetaKit.

Years later, Abbasi realized the true scale of the problem as an entrepreneur running his first startup, Vast Studios.

“Our vision as a company is to enable the advancement of SMBs.”

“I would spend my whole Saturdays with a bookkeeper going through the books, [figuring out] how did we do this month, how much cash do we have in the bank, who needs to be paid, and so on,” Abbasi said.

After Vast Studios was acquired in 2015, Abbasi and his co-founder, Serguei Kloubkov, began building a platform to remove the headaches associated with paying vendors and suppliers. Following early struggles with product-market fit, Toronto-based Plooto now boasts over 7,000 customers in the United States and Canada, attracting investment from the likes of Luge Capital and Inovia Capital along the way.

The startup is also facing down stiff competition in the SMB financial software arena from startups like Bill.com and Melio. But Plooto believes it can compete on pricing and customer experience, and has an opportunity to solve a problem faced by almost every entrepreneur.

Plooto’s platform helps SMBs automate their accounts payable and accounts receivable operations. The platform integrates with accounting systems like QuickBooks and Xero to eliminate manual data entry, and automate the reconciliation of bills and invoices.

In its early days, Plooto looked quite different. Before Abbasi and Kloubkov, Plooto’s CTO, began building the company, the duo engaged with other entrepreneurs and business owners and discovered that one of the key reasons SMBs struggled with payments lay in the way banks were set up.

“One of the main issues with the existing payment infrastructure is that every single bank is sitting on their own little network,” Abbasi said, noting that because of the closed-loop nature of banks, there was no universal method of exchange between different financial institutions.

Around that time, Bitcoin and blockchain were beginning to emerge on the global stage, promising a universal, decentralized network of payments that anyone could plug into. “[Blockchain] was very, very interesting as a concept because it was aligned with what we were trying to do, which is to help every SMB seamlessly manage their payments,” Abbasi said.

Plooto decided to build a Bitcoin-enabled payment management platform and released it to customers in 2015. However, the startup quickly encountered challenges with product-market fit, as transferring between Bitcoin and US or Canadian dollars became cumbersome for its customers.

“The feedback we got from our customers was, ‘we love the solution you’ve built, but just make it work with existing payment rails,’” Abbasi said. But because the solution was blockchain-based, the CEO said the banks initially showed no interest in working with Plooto.

Using his past experience and relationships with BMO, Abbasi was able to gain sponsorship from the bank and the ability to tap into the Canadian payment network in order to build its existing platform on top of banks’ payment rails. Over the course of nine months, the platform moved away from blockchain and towards a technology- and payment rail-agnostic network.

Once the new platform was finalized and launched in 2016, Plooto’s software could ingest payment data from any bank in North America and translate it into the languages spoken by other banks, while allowing businesses to update their books from within the Plooto platform. Later on, the platform allowed customers to process payments internationally.

“We see the future of Plooto as a single solution to manage your entire cash flow.”

In 2019, Plooto made major changes to its business model. Before, the company charged on a per-transaction basis, and after interviewing highly-engaged customers, discovered that its automation capabilities made them want to stick around.

“When our customers told us that, we doubled down on building the platform and making the platform more and more powerful,” Abbasi said. “Plooto went from just being a payment company to a workflow automation company.”

As part of this change, the company decided to switch to a subscription model. Abbasi described this as the “most stressful period” in Plooto’s history, as the company wasn’t sure how many customers it would lose. However, this move proved fortuitous to Plooto, which converted 82 percent of its customers to paying subscribers, and according to the CEO, validated the new iteration of Plooto’s platform.

Plooto is not the only player in the payment automation space. One of Plooto’s top competitors is Bill.com, which automates financial operations for SMBs, and is used by over 85 percent of the top 100 accounting firms in the United States.

Plooto believes it has several competitive advantages over Bill.com, including more customization over payment workflows, two-way integration with accounting software, and no additional user fees. However, the startup will also face competition from free-to-use solutions like that of Melio Payments, which also targets small businesses.

With this competition, Abbasi is trying to push Plooto into the winning circle by creating a “fully curated financial experience” for SMBs, which starts with filling more gaps in the accounts receivable and accounts payable space. Recently, the startup launched Plooto Capture, an invoice management solution that uses optical character recognition (OCR) to automate the creation of payables from invoices within the Plooto system.

Abbasi said this new feature is aimed to take the typical invoice management process, which requires a lot of time and manual data entry, to a near-instantaneous process, where all relevant data is automatically pulled from an invoice. Notably, Bill.com’s invoice processing tool uses artificial intelligence technology that is similar to OCR.

Another area Plooto is eyeing is giving customers the ability to create and customize their payment workflows, allowing them to add new managers and leads responsible for different suppliers as their business grows.

In the future, Abbasi wants to broaden Plooto’s scope of financial solutions even further, including helping customers secure loans, open bank accounts or get insurance through partnerships with other financial institutions. Abbasi said Plooto would be the technology intermediary allowing SMBs to access various financial solutions from one place.

“We see the future of Plooto as a single solution to manage your entire cash flow,” he said.

Abbasi believes there is still a massive opportunity for Plooto to help SMBs better manage their cash flow. Given that 81 percent of firms still use paper-based systems for their payments, it appears the problem Abbasi identified 15 years ago is far from solved.

“Our vision as a company is to enable the advancement of SMBs,” he said. “We really want to help them get to that next stage of their dreams, goals, growth targets, whatever it is that they want to achieve.”