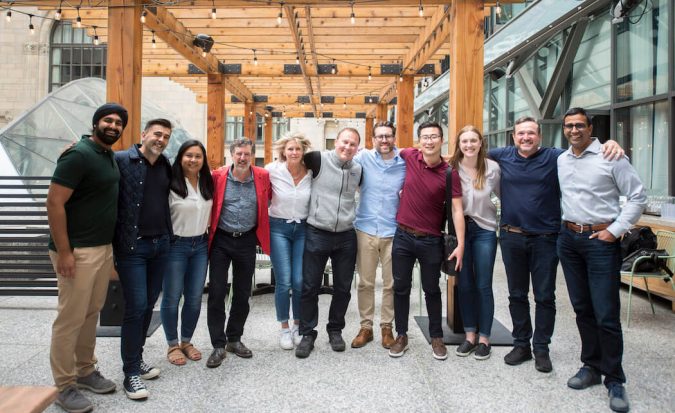 Framework Venture Partners is on to its second fund having secured an initial $100 million USD and a new investment team.

Framework is targetting a $250 million USD final close for its second fund, more than double the $105 million CAD it secured for its initial fund.

“This next horizon of [Framework] just really doubles down on Framework from Fund I.”

“I feel far more excited than I did with Fund I in that I feel the probability of our success has gone up,” Framework co-founder and managing partner Peter Misek told BetaKit. “I feel that our ability to propel our companies is stronger, the expertise that we can bring to bear is just so much deeper and so much wider. I just feel unbelievably, tremendously excited about the value we can bring to the ecosystem.”

Misek said that value will come in a variety of forms, including Framework’s expanded investment team.

Framework has brought on a lineup of investment individuals that bring an array of experience to the firm. Those include Barbara Dirks, formerly of Silicon Valley Bank, and Jim Texier, formerly of Lightspeed, who both joined as partners, as well as Mike Dobbins, formerly group head of RBC Ventures, who joined as a venture partner.

“This next horizon of [Framework] just really doubles down on Framework from Fund I, but puts it on steroids,” Dirks told BetaKit.

Framework’s new additions are balanced by a number of personnel departures over the past year, which includes co-founder Andrew Lugsdin, who has stepped back from the firm for Fund II.

Framework held the first close of Fund II in December 2021. Limited partners (LPs) in the fund include all of Frameworks LPs from Fund I, as well as some new, undisclosed investors. Royal Bank of Canada, Cadillac Fairview, and the BC Tech Fund (managed by Kensington Capital) have all re-upped, while BDC Capital, which anchored Framework’s first fund with $50 million, is also back for the second fund.

Misek started Framework with Lugsdin in 2018 as a spin-out from BDC Capital. The pair had previously served as partners of BDC’s IT Venture Fund. Misek stated that he joined BDC after the group approached him to help improve the track record of its fund.

“The deal was, if we hit certain benchmarks, we could spin out,” Misek told BetaKit. “We hit those benchmarks far faster than they thought; we ended up hitting them in less than three years, and in 2018, Framework was born.”

While Framework is no longer part of BDC, it continues to co-manage BDC Capital’s IT Venture Fund – deploying what follow-on capital remains in those funds and sitting on portfolio company boards (Misek, for example, remains on the board of TouchBistro).

Misek explained that Framework did not meet its $150 million CAD target for Fund I because an LP backed out. While he would not disclose the name, sources told BetaKit in 2019 that Fidelity had backed out after tensions between the two firms following the initial Fund I announcement. Misek told BetaKit recently that even after the 2019 close of Fund I, he remained hopeful Framework could recover the investor’s interest, but that did not come to fruition.

When it comes to Framework’s second fund, Misek does not predict any such issues. The VC told BetaKit he expects to reach a final close for the fund by December of this year. “We’ve got hard commitments, that’s going to happen,” he stated.

Misek attributed his confidence to the firm’s Fund I performance, noting that Framework believes it’s “a top decile performing fund in the world.”

Framework is fundraising at a time when the macroeconomic environment has shifted and made it harder for startups to raise capital. However, the same is not true of venture firms.

Framework has seen the changing economy impact fundraising in certain ways, however, such as increased scrutiny from LPs. Misek said Framework has seen LPs increase their scrutiny of firms. “Those funds that have hard committed, they’ve [done] 50x the diligence they would have done before.”

Misek and Lugsdin led Fund I alongside Ajay Gopal, who also came from ​​BDC’s IT Venture Fund and served as a principal in the early days of Framework. Gopal has since become a partner at Framework, in addition to the other newcomers to the investment team.

Dirks and Dobbins bring expertise from the banking side. Dirks was chosen by Silicon Valley Bank to create its Canadian team in 2018. She later stepped back from the group for personal reasons, while Dobbins, who joined Framework in March, headed up RBC Ventures.

Texier brings an operational and technical background to Framework. He has served as chief technology and product officer for the likes of Lightspeed and SSENSE.

Both Dirks and Texier joined Framework last year in advisory and support roles for the firm’s portfolio. They then became partners as Framework built out its second fund.

Other changes include the promotion of Framework senior analyst Jonathan Jennings to associate at the beginning of this year, and the addition of Boyang Li as an associate this year as well. Last year also saw principal Byron Thom depart to join Framework portfolio company Cymax Group Technologies.

Misek explained that expanding the investment team was very intentional. Framework takes a hands-on approach with its companies, focused on helping them scale once they have reached customer traction. Misek noted that Framework wanted to ensure it had operational experts in four key areas: finance, tech product, talent, and go-to-market.

In addition to expanding its operational expertise, Framework is expanding the programmatic supports that it provides to its portfolio companies.

Texier will also serve as the firm’s chief technology officer, helping lead efforts to launch a data platform that Framework is calling the Startup Scorecard.

The data platform is something Framework has been working on for a while, though recently formalized with the help of its new team. The Scorecard is meant to help analyze a startup’s potential success rate.

“We tell people we can remove 10 to 20 percent of your mistakes.”

It includes data from both Framework and non-Framework portfolio companies, and the firm uses it for its own due diligence while also allowing others access in order to gauge performance. Framework claims to have data on more than 30,000 North American startups.

Through the platform, startups can also opt-in to be matched to potential seed and pre-seed investors through what Framework calls its Investor Network. Framework can do this, Gopal explained, because the firm has been collecting data and building investor relationships for a number of years, and now wants to productize what it has gathered to help companies at scale.

The database is currently being beta tested, Texier noted, with Framework having shared the platform with a group of 10 venture firms in order to collect feedback.

Misek likened the platform to Bloomberg’s collection of company portfolios, expressing hope that Framework’s platform could become “the Bloomberg of private markets.” The goal, he said, is trying to help solve the industry-wide issue of startups trying to build connections with investors. “We actually think we can have a bigger impact in the ecosystem than we originally thought,” he said.

It’s that mix of operational expertise and data that makes Misek feel Framework has a winning formula, setting Framework apart from other venture firms.

“We have a hypothesis, and it’s just a hypothesis, we haven’t proven it yet, that if you combine great data with operational influence early, that removes some percentage of mistakes,” said Misek. “We tell people we can remove 10 to 20 percent of your mistakes, [and] your path and probability of becoming a unicorn increase exponentially.”

Framework also provides the opportunity for its companies to work with executive coaches and therapists that it has on retainer, with an aim to support “the humanistic side” of businesses.

Framework is not unique in using data and providing supports to its portfolio beyond investment. It’s a venture model that has become popular in recent years. In Canada, many venture firms emphasize the support they provide to companies, one notable example being Georgian, which after closing a $1.02 billion USD Alignment Fund I in 2021 rebranded, dropping the word Partners from its name and positioning itself as a FinTech and software company in its own right. Georgian has its own data platform for its portfolio, with the aim of helping them to accelerate company growth.

Many major international venture firms also take this approach. Sequoia, for example, has a number of internal programs where it aims to help its companies reach certain milestones.

Framework’s ambition differs slightly in that it also hopes to see companies beyond its portfolio use the data platform and network. “If this works, we will become the single largest matcher of early-stage funders … and startups,” Misek claimed.

A Framework for international expansion

Framework’s thesis for its second fund remains the same: the firm will continue to invest in Series A and B startups in the software or marketplace spaces.

Framework plans to invest in between 14 to 18 companies and plans to cut cheques between $3 million to $10 million USD. The majority, about 60 percent, is reserved for follow-on capital.

The firm is also looking to increase its presence in the United States for Fund II. This includes opening an office in Austin, Texas.

Texier noted that Framework expects to make the majority of its investments in Canada, with a good chunk going to the United States and approximately 15 percent in Europe.

The increased international focus comes for two reasons: because federal government-backed BDC is no longer an anchor with expectations and requirements for Canadian returns; and because Framework, Misek explains, worked to develop a strong reputation in America in recent years.