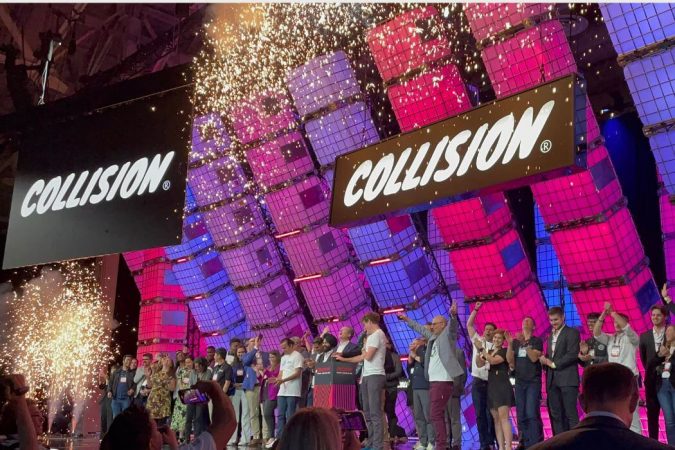 The vibes were strong and the questions were soft.

More than three years since it first landed in Canada, Collision was back IRL this evening at the Enercare Centre in Toronto. Perhaps owing to the long gap between Collision’s first and second impressions on the Canadian tech ecosystems, the opening night content was high on positivity and optimism, if light on critical analysis.

No less than Web Summit co-founder Paddy Cosgrave, Collision co-hosts Sunil Sharma and Casey Lau, and Toronto Mayor John Tory expressed their excitement to welcome 35,000 attendees back in person. The closing panel focused on edutainment startup Kukua, which produces children’s programming informed by the company motto that “anything is possible.”

There were a few bumps in the road, however: after a 30-minute delay, the evening opened with several nervous startups pitching their companies to a very cold audience; Mayor Tory asked Collision attendees to “celebrate the end of the pandemic” before remembering we’re only “near the end of the pandemic”; and attendees almost left the Enercare Centre prior to the official opening countdown and pyrotechnics.

Maybe we all need time to get our sea legs again.

In his fireside chat with Anne Gaviola of Global News, Dapper Labs co-founder and CEO Roham Gharegozlou put on more than a brave face amid the broader tech market downturn and crypto crash — he was downright bullish on Web3. “For me, nothing has changed,” he said.

The CEO of the company behind NBA Top Shot stated that Web3 is the only technology “with 1000x potential already built-in,” a claim that went unchallenged by his interviewer. In response to a question about the state of the NFT market, which has seen sales flatline in recent months as initial NFT hype has quickly faded, Gharegozlou said he believes Web3 products in gaming and entertainment that provide real value are “completely recession-proof.”

Gharegozlou noted that this is the second crypto crash that the nearly five-year-old startup has been forced to navigate. “We started Dapper Labs in 2017, immediately went through a bear market cycle, and that’s where we built the whole company,” he said.

The CEO, who noted the number of developers he has seen abandon Web2 in favor of Web3 projects, praised the technology for its “ability to shape the future.”

“In Web3 you have to stay solvent longer than any markets can stay irrational, so make sure you don’t run out of money,” says @dapperlabs CEO @roham, kicking off @CollisionHQ #CollisionConf tweeting for @ForbesCrypto pic.twitter.com/94ICithADQ

“This technology shift isn’t about a new corner of the internet, it’s about remaking” everything, said Gharegozlou, calling it “the single biggest economic opportunity of my lifetime.”

At the same time, Gharegozlou acknowledged that present conditions have been tough for Dapper Labs and other Web3 customers. “We have to have empathy that customer lives have been deeply affected,” he said. According to Gharegozlou, to survive this environment, startup entrepreneurs need to “stay solvent longer than any markets can stay irrational” and ensure they are building products that take into account the current consumer mindset, which is “around efficiency much more than luxury.”

MaRS CEO Yung Wu continued with his own message of positivity, calling entrepreneurs inherently optimistic. He called this time when the world is coming out of COVID-19 a moment for renewal and breakthrough.

Margaret Atwood took a more pragmatic approach. “I’m really old and I can remember when it’s been worse,” she said on stage.

MaRS CEO @YungWu onstage at #CollisionConf speaking to the necessary optimism of the age:

“If you are in the business of creating something from nothing, you better be an optimist. This is a time for small groups of committed people to do special things.”

After touching only nominally on women’s rights and the impending end of Roe vs. Wade in the United States, Wu and Atwood also discussed the global concerns of climate change and cleantech. Wu advertised the MaRS launch of a new Climate Impact Accelerator alongside KPMG Canada announced earlier today, with the CEO noting the importance of cleantech innovation on carbon reduction: “one percent market penetration takes out half of Canada’s emissions.”

When asked about how to get people invested in making positive climate change, Atwood stated, “We have to go from scaring the kids to scaring the politicians.”

Noting the work of startups like Carbon Engineering and BrainBox, Wu also addressed the importance of tech in climate action. “There’s no pathway to net-zero without embedding innovation,” he said.