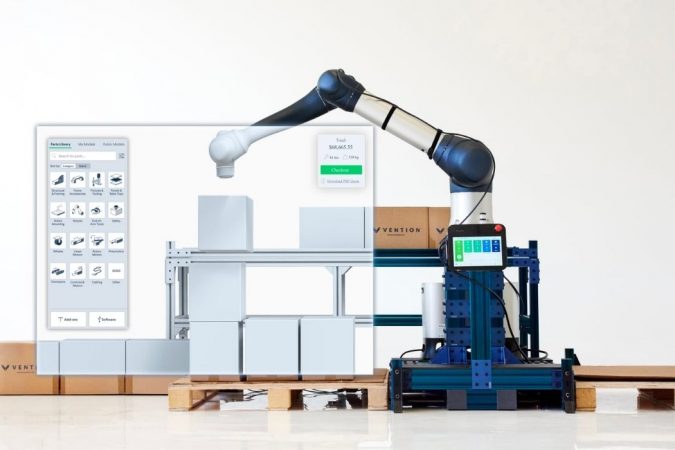 This is the second Georgian-led round for the industrial tech startup.

Since its Series B almost two years ago, Vention has more than doubled its headcount, increasing its employee base from 100 to 260.

According to Vention, this new funding will be used to grow the company’s go-to-market, expand its global distribution footprint, and accelerate the development of its hardware and software platform.

Founded in 2016 by Etienne Lacroix (CEO) and Max Windisch (CTO), Vention offers a self-serve platform that combines a suite of engineering software as well as plug-and-play automation components to help manufacturing professionals design, order, and deploy automated equipment. Vention claims a client base of over three thousand across five continents and 25 manufacturing industries, which includes Google, Universal Robots, Stryker, and Fanuc.

Lacroix said democratizing industrial automation is an “ambitious mission,” citing the $180 billion market. With most of the manufacturing plants in the US having little to not automation, he said, the company is at the dawn of a new era.

“Vention has emerged as the one platform where clients can do it all: design, automate, order, and deploy,” said Lacroix. “Such integration lowers the barrier to accessibility that is needed to democratize the industry.”

Vention has also added new platform capabilities to serve a wider range of use cases. Recently, the company launched code-free robot programming tools to let users program their robot in the cloud, order the entire robot cell, and deploy it on their manufacturing floor.

Vention closes its Series C round following a period of significant growth for the company. Since its Series B almost two years ago, Vention has more than doubled its headcount, increasing its employee base from 100 to 260. It has also gained two new offices in Berlin and Boston this year.

With a total funding of around $182.2 million CAD to date, Vention’s past financing rounds comprises a $38 million Series B round, $17 million Series A round, and $3.5 million in seed funding.