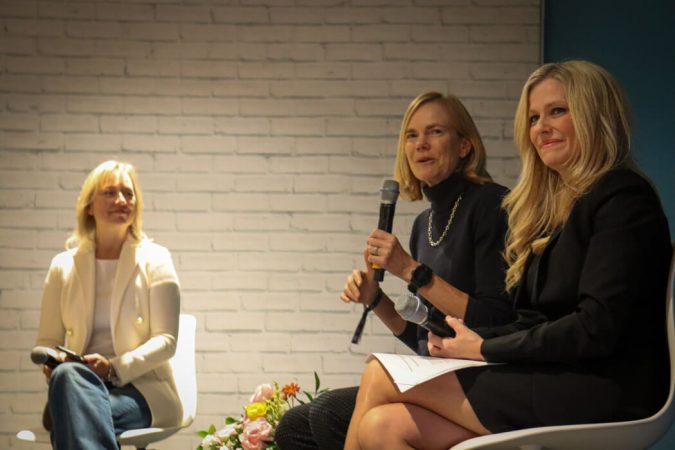 Summer is over and so are slow news days, it appears.

Elevate returned in person this week and BetaKit was focused on the two stages we programmed for the festival – AI and FinTech – as well as moderating several compelling panel discussions.

“Half a billion dollars for women in Canadian tech. Pretty cool!”

Recorded late on a Thursday night after a busy week, Rob and I might not be at our most cogent on this episode trying our best to answer listener questions.

But when great listener-submitted questions on the latest Canadian tech news prompt even bigger questions, you know it’s time to pod.

First, we have the news – broken by BetaKit – that Janet Bannister has stepped down as Real Venture’s managing partner while the firm pauses its fundraising. The question asked on this podcast – is Real done? – is one that has been asked of BetaKit reporters several times over the summer. In fact, BetaKit has been reporting on the strong headwinds pushing back against the firm’s attempts to close a new fund for more than a year, since founding partners Alan MacIntosh and JS Cournoyer moved to the board.

There are several reasons for this, all discussed on the podcast: significant partner turnover, poor portfolio performance, and perhaps an insurmountable Ontario-Québec divide. But it’s the fundraising pause that points back to the original question; VCs pay themselves from the management fees of their funds, so with no new fund, how does Real keep the lights on?

Again, these questions lead to more questions. Namely: what’s next for Janet Bannister, one of Canada’s most prominent women VCs?

While I wouldn’t say I’m… speculating on this podcast, I do talk a bit about my dreams and conversations about those dreams, which is a little silly but also deadly serious. Many people in the ecosystem thought Bannister’s summer sabbatical pointed to a departure while others still believed it was related to the aforementioned pause in anticipation of a better fundraising climate. Meanwhile, some Real partners decided to depart the firm this summer, while I’m told other key people turned down offers elsewhere to stick things out. How many people on both sides were aware of Bannister’s decision before the announcement was made at Real’s AGM this week?

I’m getting distracted by more questions. Instead of my ramblings, let’s look to Bannister’s own words.

Per BetaKit reporting, Bannister has no plans to leave Real Ventures “any time soon.” But she also told BetaKit that failing to close a new fund this year gave her “the opportunity to reflect on how I would like to have impact over the next 10 to 15 years.” Upon reflection, Bannister said that she has decided to do something “more innovative, more creative.”

That last statement didn’t come from BetaKit’s original interview with Bannister, but during Thursday’s Elevate Women in Tech stage, on a panel with BDC’s Michelle Scarborough. Scarborough has also had a busy week of a different sort, announcing $500 million in new capital to support women-led ventures and venture capitalists.

It’s exactly the type of capital that a Bannister-led Real might have taken advantage of in its fundraising pursuits. Or perhaps (and this is speculation) that Bannister might take advantage of herself to do something more innovative, more creative. Timing is everything, right?

Back to the good news. BDC’s Thrive Platform is a major expansion of the original Women in Tech fund, reflecting three programs and a larger total allocation than the last (and final?) VCCI commitment. It’s a big deal.

It’s such a big deal that it poses so many more interesting questions, which we only briefly touch upon on the podcast; look elsewhere than two middle-aged white guys to answer them.

Until we find the right guests to help us out (we have some ideas), take solace in a brief conversation at the back-end of this podcast where Rob discusses enjoying tech events in person again, and I reveal to you the secret data behind a miracle.

The BetaKit Podcast is sponsored by SAAS NORTH.
Use code BETAKIT20 for an early bird discount.