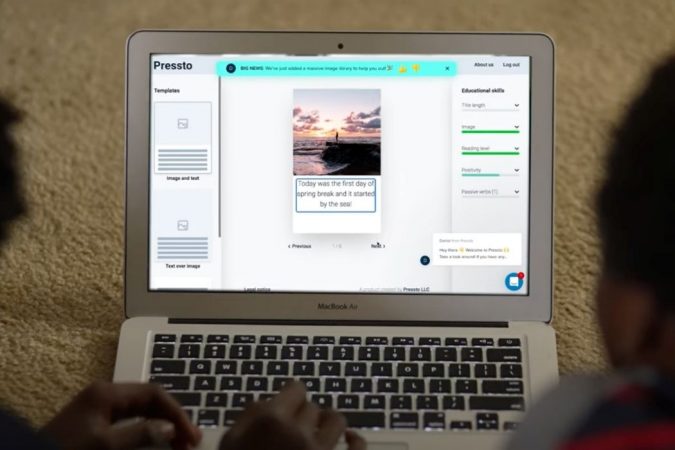 Pressto’s platform aims to make it easy for kids to make zines of their own.

EdTech startup Pressto has raised $1.5 million in a pre-seed round led by Tidal Venture Partners.

Although Pressto is headquartered in Brooklyn, the startup is also located in Vancouver, Montréal, and Halifax. As Pressto was initially launched in Halifax, the company won $25,000 in prize money from Atlantic Canada innovation hub Volta in its 2021 pitch competition.

“We’ve seen great strides in the progress and velocity of the Pressto team—incubated in Halifax, Nova Scotia, with an early global reach—and we are genuinely excited to be partnering with such an innovative and needed EdTech platform,” said Ian Whytock, co-founder and managing partner of Tidal Venture Partners.

Founded in 2021 by serial entrepreneur Daniel Stedman, Pressto offers a SaaS-based newspaper and zine builder that aims to make learning to write fun for children. Stedman volunteered to launch an elementary school newspaper where his son was a student in Brooklyn and found that many student newspaper programs had been abandoned, which was part of his inspiration for creating Pressto.

According to Pressto, the platform is designed to help students develop a healthy relationship with what they consume and create in the media. Using cognitive behaviour science, Pressto’s tools teach educational skills, along with critical thinking and media literacy to help children to differentiate between fact and opinion.

Pressto said its primary focus is engaging with schools, offering its platform as a supplemental tool that can be integrated with any curriculum across different subject areas. The platform is currently part of a pilot program with the New York Department of Education, reaching over 30,000 students throughout the city.

Stedman’s mission in improving media literacy through Pressto builds on his own past experience working in the media industry. In 2003, he co-founded Northside Media and bootstrapped the business to over $5 million in revenue according to Stedman’s LinkedIn page. Stedman eventually led the company’s sale to Zealot Networks in 2015. He later took over Northside Media again, which then filed for bankruptcy last year.